Educated in Bel Canto singing at London's Trinity College of Music and The Royal Academy of Music, Andrew's professional musical career has spanned over two decades to date. He started his musical training with Suzuki Method violin at the age of three through helping him to develop an unusually good ear early on. Using those skills, he taught himself piano by listening to songs on the radio and re-recreating them note for note. He learned guitar in the same way, the instrument that would give him his first major opportunities. Meanwhile, he kept up the violin, playing in various orchestras, gaining an invaluable understanding of how to work together with other musicians and how to write and arrange for groups of different sizes from a classic four piece band to a full symphony orchestra. His studies earned him Grade 8 with Distinction in ABRSM examinations in voice, violin, piano and music theory while his expanding knowledge of production and arrangement won him the Daily Telegraph Young Jazz Arranger of the year.

On London's singer-songwriter scene, Andrew was playing guitar and musically directing Australian singer and actress Sally Boyden's Candy Bombers band while working as a producer and engineer at legendary producer's Phil Chapman's Loud and Clear Productions. Through Sally, Andrew met the now Grammy-nominated Australian singer and songwriter Sia  (Zero 7, The Voice). Starting her career at the time, she joined forces with Andrew, formed a band and spent the next year touring Europe. Other sessions during that time found him playing guitar for reggae legend Horace Andy (Massive Attack,  keyboard for Dave Stewart (Eurythmics) and tracking some guitar on Rolling Stones song among other things. 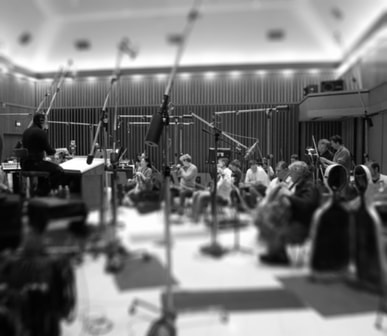 ​The session work as a guitarist, a keyboard player and vocalist  started a professional relationship with his long time friend and composer, Ilan Eshkeri, with whom he collaborated on his first major motion pictures including, Layer Cake, Stardust and Hannibal Rising.

The playing turned into writing and when the late Michael Kamen's score for Boo, Zino & the Snurks, needed to be completed posthumously, Andrew took on a vital writing role in the project. Shortly after completing that score, an opportunity arose to contribute to a movie score with German composer, ​Klaus Badelt (Pirates of the Caribbean, Gladiator) who was living in London at the time. The project went well and Klaus invited Andrew to travel to Los Angeles to work with him on the then forthcoming  movie,  Constantine starring Keanu Reeves. That collaboration would be the first of many very successful projects Andrew and Klaus would work on in the coming seven years from writing and performing contributions to movies such as, Poseidon TMNT, 16 Blocks, Premonition, Ultraviolet, Solomon Kane, Shanghai and many others through to co-writing and co-producing the scores of the drama epic Among Wolves and Julian Farino's (Entourage) The Oranges, starring Hugh Laurie, Leighton Meester, Catherine Keener and Oliver Platt. Andrew has recorded orchestras all over the world from London's Abbey Road Studios to LA's Eastwood Stage at Warner Bros.

In addition to composing, Andrew began to produce up and coming artists' records. Tying together a whole lot of experience, he now writes with, produces and mentors artists from a variety of musical backgrounds.